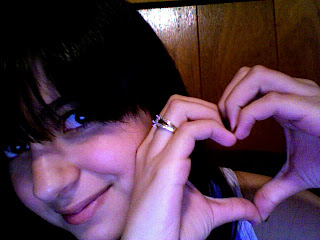 Seventeen year old Katie Salazar from El Paso, TX, says music is “in her blood” and one could agree that talent is natural, after viewing her MySpace page to find that she already has a fan base. Ms. Salazar has a different sound and describes her sound as a mix of country, pop, and rock.
Katie says one of her favorite songs is “Place in this world” by Taylor Swift. Katie explains, “I'm at the point in my life where I'm still trying to find my place where I belong. I'm sort of an outcast so
music is where I feel like I belong.” I asked Katie if she dreams of moving to Hollywood, or wants to stay a southern girl. She says, “I've thought about moving to Hollywood A LOT, & I'm thinking of
probably moving there after I graduate. But at the same time I kind of
want to stay in the south, I'm a Texas girl & it’s hard to picture myself leaving, I love it here.”
Katie demonstrates that music is her passion in life, attending auditions, and playing shows wherever she can. You can also see that her heart is in the right place when she describes one of her goals, “I want to put on a charity concert to help raise money for people with kidney problems, because my grandma passed away from that, and feel like more could’ve been done.”
A good musician has a good stage presence. Most of the musicians we have spoken with tend to have some skill and interest in acting as well, and Katie is no exception. Although being an actress is not her ultimate goal, she participates in stage acting at church and school. These skills, will undoubtedly add to Katie’s resume for success on the sound stage.
The first word that comes to mind when thinking of a career in the entertainment industry is “challenge.” Katie describes the road to success in front of her quite well. Katie says the most important thing to her is “proving I'm not just another girl who plays guitar & writes songs like a lot of people. Its proving to
everyone that yah a lot of people do what I do but what's different about me is I write about me, I write about my relationships, I write about real things that happen to real people!”
Katie seems to understand what is important before making it big. She talks about what will keep her grounded in the business, when I ask how she will deal with fame (which she already has a taste of doing many interviews and having a fan base). Katie says, “staying true to myself & always putting God first & let him be my guide,” firstly, and, “focusing on what I love to do & have worked hard for my whole
life and never forgetting that the reason why where I'm at is because of the fans! They're the ones taking me places.” Keep the name Katie Salazar on your radar. You are bound to hear it on your radio station in the near future.

UPDATE: Katie Salazar one of the most played artists on Colt Chambers' Radio! Listen Here
Posted by Ashley Ruskiewicz at 4:08 PM

Ashley Ruskiewicz
Ashley Ruskiewicz is a graduate of Brandeis University and New York Film Academy. As a Director/Producer and social media specialist she understands the entertainment business inside and out. She has been named the Teen Celebrity Examiner for the Los Angeles area.